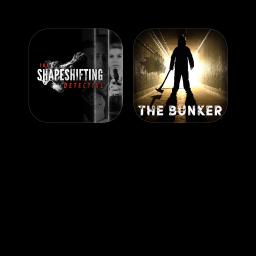 Wales Interactive are proud to offer two FMV games, The Bunker and The Shapeshifting Detective, all discounted in one bundle!

The Shapeshifting Detective is a supernatural-noir murder mystery FMV game where you play as a detective who can shapeshift into other characters, allowing you to unlock secret conversations and private encounters. The game features more than 1600 full HD video responses, a simple questioning interface with unique ‘delete’ mechanic, and a randomly chosen murderer at the start of the game. Developed by the World Record-breaking makers of "The Infectious Madness of Doctor Dekker".

The Bunker is a completely live-action experience, filmed on location in a decommissioned government nuclear bunker with a plot crafted by writers behind The Witcher, SOMA and Broken Sword. Starring an incredible cast including Adam Brown (The Hobbit), Sarah Greene (Penny Dreadful) and Grahame Fox (Game of Thrones).