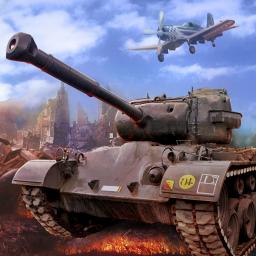 Brace yourself for the most epic tank battles as of yet! Experience World War 2 and command a battalion of war machines against the incredible might of Axis powers in this explosive clicker game!

LEAD YOUR ARMY TO GLORY!
This clicker game puts you in the boots of a battle tactician and a commander-in-chief loyal to the Allied powers in the World War II. Upgrade your tanks and other war machines and use every tactic at your disposal to achieve victory and earn heroic rewards! Build an almighty army and tap away to unleash onslaught upon your foes!

TAP TO VICTORY!
A clicker game like no other, where a single tap can mean immense destruction! Call in airstrikes and bomb runs when things go SNAFU. Your tanks even battle enemies and collect the spoils for you while you're away. Make the clock reverse and replay past battles with the aid of a time machine!