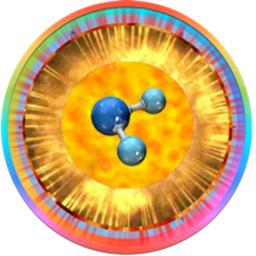 A mystical journey through a stunning and surreal universe, surrounded by the chaos of cosmic annihilation. Think fast, or be obliterated.

If you think the opposing forces that life must conquer in order to survive are armed with bullets and bombs, then think again. Gravity, electromagnetism, friction, and decay are where the real struggles take place.

Your reflexes, computer skills, and deductive reasoning will either be challenged and sharpened or they will be overwhelmed and you will be disintegrated.

•You are a single molecule of water roaming the cosmos
•Find your way back to the glistening blue sphere where you belong
•See what it's like to be vaporized by the quantum froth of pure energy
•Confront the invisible forces of annihilation
•Do battle with the eternal forces that created the universe
•Challenge the fundamental components of all matter
•Friction, magnetism, and gravity will control you
•Try to elude electromagnetic particle chaos
•Succumb to sinister galactic decay and be obliterated
•Navigate from a cosmic to planetary to microscopic scale
•Evade the quarks, fermions, and bosons aligned to destroy you
•Escape waves of particles bound together in continuous opposition by electromagnetic forces that can obliterate galaxies.

Games in which players do battle with weapons, machines, or angry creatures are plentiful. But there are dimensions that exist beyond the rusted artifacts of wars: dimensions where guns, bullets, and bombs have no effect. The battles that take place are between the eternal forces that created the universe. There is no anger. There are no aliens. There is no evil.

We are comprised of molecules that can neither perceive nor understand us, and in turn we are merely the molecular components of larger organisms that we can neither perceive nor understand. It is often said of those who want to pick a fight, that they should pick on someone their own size. But which size? The size of the smallest particle of what we are, or the size of that organism in which we are a molecular particle of whatever it is?

Enter this world and you are surrounded by the opposing forces that both create life and annihilate all matter. As you move through the cosmos you must gain strength and protection by merging with other water molecules. Attraction, repulsion, decay, and annihilation all work for and against you. Friction, magnetism, and gravity control you., and they are invisible. Use the navigation star to seek out and absorb strength and to avoid being vaporized. Be vigilant. There are areas of volatile danger and areas of relative safety. Your environment changes constantly. Accumulate strength and points by combining with other water molecules. Advance though successive levels of numeric strength until you are able to reach the precise location in the carbon rich biosphere where you belong.

Put down your clumsy guns, climb out of your rusty tanks. Confront the challenge of surviving the unconquerable planetary forces that are aligned to vaporize you. See if you can find your way back to the exact spot where you belong in the glistening blue sphere we call home.