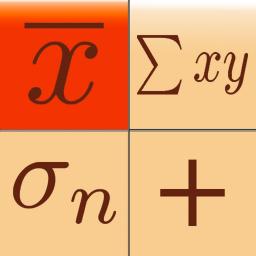 Statistics Calculator++ is a scientific calculator with statistical, regression analysis (including graph) and probability distribution calculations and graph capabilities.

In designing the statistics functions of this app we had one thing in mind: The user should not need to read a single line of manual to perform the statistical analysis.

You have the capability to add multiple lists and use any of them as list X, list Y, or list f. Access Lists Editor feature by tapping the icon on top right of the Statistics Lists view. Furthermore, all these lists persist in the memory. Therefore, if you close and the relaunch the app the lists are there for you.

Other major features of Statistics Calculator++ are:

- Shows the expression as you enter and keeps a history of your calculations.

- Capability of inputting degrees, minutes, and seconds for angles and converting between degrees-minutes-seconds format and decimal format.

- Sinusoidal functions can be calculated for angles in units of degrees, radians, or gradians.

- Showing the content of memory on MR button, as long as it fits.

You are going to love the simplicity of the user interface and yet have the powerful functionality with which Statistics Calculator++ is loaded.

Please do not hesitate to contact us for any questions, comments, to report any bugs, or to suggest additional functions you would like to see in the upcoming updates.