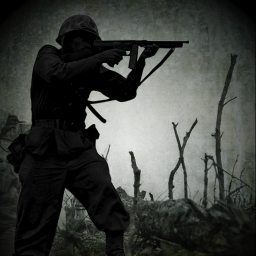 Firefight is a World War II real-time simulation game with more AI and attention to detail than any other game in its genre to date. Tanks are modelled with a physics engine and have gears, rev counters and speedos, and steer themselves with brake levers to give them realistic looking tracked vehicle movement. Each bullet, shell or piece of shrapnel is modelled in 3D and ricochets realistically off sloping surfaces. You can see each infantryman's rank, name, weapon, ammunition remaining, heart rate and fatigue levels. Machine gunners will call for ammunition when they're running low and other squad members will rush over with spare ammo if they are carrying any. Wounded men call for medics who will sprint over to administer first aid. Off-board artillery can be called in but will have to fire several ranging shots before the full 8 gun battery opens fire simultaneously.
If you liked Close Combat you'll love Firefight!