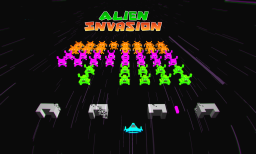 Arcade shoot 'em up that sees you pitch your starfighter skills against endless waves of alien bugs.

The goal of the game is to shoot all the alien invaders and get the highest score before losing all three lives.

There are four different power ups that players can collect that are randomly dropped by the invaders.

The harder the enemy, the greater the chance they will drop a power up. The power ups can be a one
shot event or a timed event. There are four different power ups that the players can collect; Triple Shot,
Single Beam Shot, Shield, and Slow Time. Collect power ups to help fight off the alien invaders and to
get the highest score.

A UFO spaceship will randomly spawn from time to time that will hover past the screen behind the alien
invaders. If the player manages to hit the UFO spaceship, the player will be awarded a random point
value between 100 and 500 points.

Invasion is meant to be 3 -5 minutes of gameplay per session. The difficulty ramps up quickly as the alien
invaders start to move quicker while time progresses. It is a race against the clock! Good luck out there!