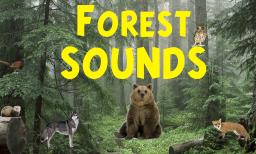 Our application will introduce you to the animals living on the taiga, you will hear the sounds of wildlife. Each animal produces multiple sounds, which makes it possible to learn how to better communicate with animals.
Also, you can enjoy high-quality images of animals in their natural habitat.

The taiga is the world's largest terrestrial biome. In North America it covers most of inland Canada and Alaska as well as parts of the extreme northern continental United States (northern Minnesota through the Upper Peninsula of Michigan to Upstate New York and northern New England), where it is known as the Northwoods.[!2!] In Eurasia, it covers most of Sweden, Finland, much of Norway, some lowland/coastal areas of Iceland, much of Russia from Karelia in the west to the Pacific Ocean (including much of Siberia), and areas of northern Kazakhstan, northern Mongolia, and northern Japan (on the island of Hokkaidō). However, the main tree species, the length of the growing season and summer temperatures vary. For example, the taiga of North America mostly consists of spruces; Scandinavian and Finnish taiga consists of a mix of spruce, pines and birch; Russian taiga has spruces, pines and larches depending on the region, while the Eastern Siberian taiga is a vast larch forest.