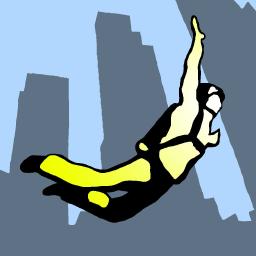 Now you can design your own levels on the website.

Do you want to feel alive? Feel like jumping off a building or a cliff? Do you want to experience the ultimate adrenaline rush and find peace with nature? iBASEjump will take you there!

B.A.S.E. stands for Building, Antenna, Span, Earth. BASE jumping is like sky diving but you jump off a land structure instead of out of a plane. This make BASE jumping much more dangerous, since you literally only have seconds before fatal impact with the ground. Plus you don't have a backup parachute! Some say these reasons make BASE jumping the most extreme and death defying sport humanly possible!

Who wants to safely sky dive when you can risk it all BASE jumping ... and attain true happiness. Nothing else compares.

iBASEjump allows you to experience the rush in first person perspective in over 30 world class locations. Base jump off:

New levels and controls will come with each update!

In mid air you can perform front flips, 360's, back flips, head first speed dives, and more, with a simple stream lined interface.

With iBASEjump you will find yourself and attain true happiness.