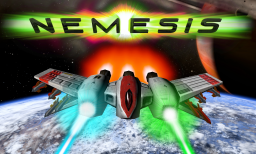 (Want to try before you buy? Check out Nemesis Lite, also available in the app store.)

Features:
* Includes both a campaign mode and death-match mode, both of which can be played in single-player or multiplayer over wifi.
* Extended gamepad support.
* Remote Control - control Nemesis 1.9 on tvOS via Nemesis 1.9 running on an iOS device. (Requires wifi.)
* Beautiful graphics!
* Intricately rendered explosion and smoke effects.
* Nine unlockable ships and 10 unlockable environments.
* Realistic physics.
* Brutal AI.
* 25 different power-ups, for all kinds of ways to smite your foes.
* Play in first person or third person modes.
* Six different skill settings, from "practice" to "ace" in death-match; 5 skill settings in campaign.
* User settable kill-limit in death-match mode.
* Multi-player over wifi.