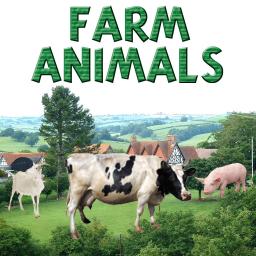 The application is built for exploring children with animals. You just need to touch the animal and you will hear the sounds that it produces animal. Total 36 big photos and different sounds. 3 sound and 3 photo for each animal. Include three mini games.

Dairy farming is a class of agriculture, where female cattle, goats, or other mammals are raised for their milk, which may be either processed on-site or transported to a dairy for processing and eventual retail sale.

In most Western countries, a centralized dairy facility processes milk and dairy products, such as cream, butter, and cheese. In the United States, these dairies are usually local companies, while in the southern hemisphere facilities may be run by very large nationwide or trans-national corporations (such as Fonterra).

Dairy farms generally sell male calves for veal meat, as dairy breeds are not normally satisfactory for commercial beef production. Many dairy farms also grow their own feed, typically including corn, alfalfa, and hay. This is fed directly to the cows, or stored as silage for use during the winter season. Additional dietary supplements are added to the feed to improve milk production.