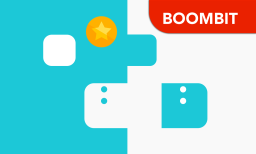 Play Double Trouble. The new game from the makers of Tower Dash, Running Circles & Spider Square.
Tap left or right to jump and control 2 characters at the same time in this crazy split screen game.

Avoid the obstacles and collect coins to unlock new characters.

A true test of your reflexes and eye hand co-ordination.