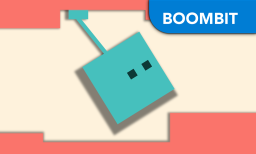 Download Spider Square and get ready to be totally Addicted. From the makers of Bird Climb, Spider Square will drive you crazy. It’s insanely hard but incredibly addictive.

In Spider Square you have to swing the Squarelicious characters as far as you can just like a spider would.

Super simple 1 touch controls but make not mistake…. this game is a tough cookie to master.

Avoid the obstacles and collect the gems along your way to unlock fantastic new heroes.

TURN BASE MULTIPLAYER:
Multiplayer mode is where the real fun begins! Play with friends or with hundreds of thousands of players from around the world. Send them a challenge and show them who is the ultimate Champion!

LOCAL MULTIPLAYER ON APPLE TV:
Connect any iOS device to your Apple TV and play with up to 8 other people on the same screen. It’s insanely fun and incredibly addictive. It’s an amazing party game!

REPLAY KIT:
Record you legendary, record breaking high scores and share it with all your friends.

iCLOUD SYNCH:
Synch your progress to iCloud to continue your games on any iOS device.