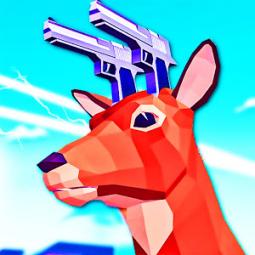 Deeeer Simulator: Your Average Everyday Deer Game is a game about unleashing chaos on a city in the way that only a tall, proud, four-legged creature displaced from its natural habitat can.

Released on Steam yesterday, the early access indie game has already captured people’s interest thanks to its clash of earnest, low-poly graphics with slapstick physics. It’s proven a recipe for instant virality on social media. It also didn’t take more than five seconds of playing the actual game for it to win me over.

The Deeeer moves like a locomotive, slowly building up a head of steam until it crashes into and destroys a lamppost or, just as likely, gets hammered by oncoming traffic and sent flying in the opposite direction. But it can also dash, attack with its hind legs, and launch its neck forward, stretching into oblivion like Dhalsim from Street Fighter. That particular attack can also be used to swing from objects like Spider-Man, though I haven’t yet mastered the art of it.