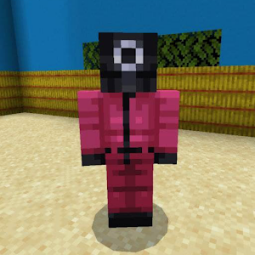 456 Squid Game players will compete for a huge cash prize in Minecraft mod.
You can choose which hero to play in MCPE: in our application there are skins of Gi Hun, Sae Byeok, O Il-nam and other characters from netflix.
In the game red light, green light you need to go forward while the doll sings the song. On the map pink soldiers are watching for the process.
Mod Squid Game for Minecraft also contains candy for playing the dalgona challenge.
The third trial involves a tug of war. You can form teams with friends and play in MCPE.
In the fifth game, you need to move on the glass steps. One wrong move can have very bad result!
There is a skinpack with heroes in the Squid Game mod for Minecraft and a map with several levels.
In addition, you can choose the side for which you will play: you can be a player, a pink soldier or even a leader!
You can complete challenges alone or with your friends. So you can paint the boring MCPE with funny skins.
The mod for the popular netflix film Squid Game challenge has been recreated in Minecraft so that you can feel like one of its 456 players!

DISCLAIMER: This is not an official Minecraft product. Not endorsed by or affiliated with Mojang. Our app fully complies with the conditions set up by Mojang.

Hello! I am a Korean who downloads this mod! If you have emoji, the stars will rise. I support you!