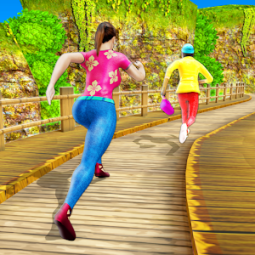 Your companion was robbed by a gang, You can help by running behind the robber to catch them.

Run as fast as you can, Dodge the obstacles coming your way.
Chase thief without loosing, Catch them by throwing bottles and kicking balls hitting them!

Avoid obstacles by jumping and sliding while running through the streets,
Hit and kick them with objects you pick on your way,
Catch all of them to retrieve the handbag.

Hundreds of missions to play when you are tired of running behind robbers.
Missions are of unique objectives with different game types.
Progress through the street map by completing missions of types as below:
Chase runner, Throw bottles, Kick Balls, Coin Collection, Item Collections, Word Finding and Bring it back.

Compete online with other street surfers based on your skill.
You can play online with eight players at a time.
Collect coin rewards based on the rank achieved in multiplayer missions.

Endless runner mode for chasing all robbers one by one.
You can collect more coins in this endless running game and use them for boosting powers.

Street Chaser was featured in Google Play Store on 1 placements in 대한민국 on 2018년6월21일.