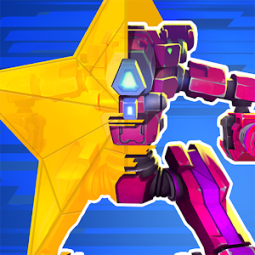 Fight with friends in team battles in unique and exciting multiplayer combat arenas. Discover and upgrade new robots and weapons with powerful, unique ultimate abilities which you can use to tactically control enemy zones in a giant world.

Through analysis of your war machines, get a better feel for their synergy and show everyone on your team how it’s done! Unite in clans and teams to become experts in the arena!

✭ BECOME A STAR COMMANDER
Prove you are the ultimate commander by increasing your rating and unlocking awesome rewards in this giant multiplayer world!

✭ UNLOCK AND UPGRADE STEEL WAR MACHINES
Unlock combat robots with incredible superpowers and upgrade them with points gained fighting in the arenas.

✭ FIGHT IN THE UNIQUE GAME MODE
— Team battle mode "Domination"! Defeat your enemies and control zones with bonuses unearthed on the battlefield. Display tactical prowess and strike your enemies with an arsenal of weapons. Wield the power of your mechs to turn the tide of battle in your favor, Commander!
— New modes will appear in future updates!

✭ FIND YOUR CALL
Play as you want to play. Do you want to dominate, strike and destroy? Or protect and help? Maybe your goal is to attack from the flank and inconvenience your opponent? Everyone will find a role to their liking—each mech is unique and provides an amazing combat experience! So unlock them all, find the ones that suit you best and earn the title of the ultimate Steel Commander!

- 3 vs 3 tactical battles in real time with players from around the globe.
- Third-person shooter optimized specifically for mobile platforms, a fast battle for survival in a multiplayer world.
- New rewards and events every day.
- Team and solo battles.
- Local and global leaderboards.
- 14 unique giant war mechs to unlock, upgrade and take into combat.
- Each robot has a unique attack technique and ultimate ability.

✰ Stay tuned for the latest news in our Facebook community: https://facebook.com/starrobotsgame/