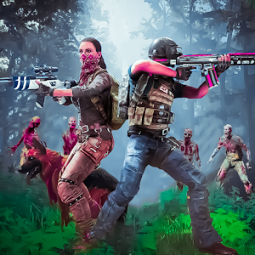 Zombies walk among us! You are one of the few survivors of a dangerous infection in fps shooting game. The zombie apocalypse began after a scientist dropped a dangerous infected virus in a secret laboratory. Despite military lockdown, in a few hours the zombie infection outbreak reached the outside and now the living dead are rising in city, and starts hunting humans to feed themselves in Real Commando Shooting Games: FPS Zombie Hunter.
Welcome to the best of action-packed fps games, where you are going to play unlimited zombie sniper and fps offline shooting games missions. If you love to play commando gun zombie shooting games offline in the action games category, we have got what you need Ready. Aim. Fire & have the fun of firing in fps game. You’ll find your favorite fps shooting action game 2021 here. In this new fps gun games, you have to complete all missions to become the number one commando in this zombie world's best action game by adventure shooting games. The gun fps games 3d offers you to play this sniper offline game without an internet connection and enjoy the offline new game 2021 for free.
A dangerous vaccine has developed a virus that mutates humans into dangerous zombies. This virus spread out causing zombies outbreaks and humans are in immediate danger of a gory death. Survivors must fight in an offline fps zombie shooting guns war to the death. Turn yourself into a fps zombie shooter and make the streets your battlefield! Attack and kill the target in this zombie-shooting survival war fps game and kill the zombie with assault and sniper. Achieve the best sniper headshot in this zombie killing fps shooting game!

It’s an abandoned city, and you need to hold your army to build it to resist the attack of killer zombies. Sometimes zombies will attack you in crowd, please be careful. In an environment of scarce resources, train your skillful army, upgrade your weapons, and find other survivors to lead the light.

Real Commando Shooting Games: FPS Zombie Hunter continues the adventure of zombie killer. The whole world is still withheld by zombies, fire everywhere, the day of the dead is here, some zombie shooters are trying to regain the control, they fight for the big city, but it’s not easy because of the zombies are getting more crowded and dangerous. Will this warzone complete or not in this Zombie shooting game? It depends on you the call for duty - the fps commando shooter survivor!

A new fps army game Recommended for you. This has attractive graphics and catchy storyline are going to make your free time more thrilling in this free offline fps commando shooting game. The gaming experience will take you to a whole new shooting level of fun in this offline Real Commando Shooting Games: FPS Zombie Hunter 2021. This 3d gun shooting games let you play the role of a secret commando of offline Real Commando Shooting Games: FPS Zombie Hunter 2021. This new fps gun games let you serve your country and kill the zombie in this army game among one of the best online shooting games. You need to be a very brave and skillful soldier in this offline zombie hunter sniper game. New fps commando gun games offer you dozens of strategic missions in this world best shooting offline games for free.

[!features!]
- This is action zombie hunter game outstanding brilliant visual and sounds.
- Appear boss zombies and various deadly zombies.
- There are different kinds of weapons pistols, rifles, shotguns, grenade, and snipers.
- Collect your deadly weapons and upgrade them stronger.
- Collect the special ability hunting and upgrade shooting skills.
- We have lots of missions and stages.
- Clear the zombie shooting stages for getting lots of game money.
- Compete against global users by PVP.
- Small capacity, rapid loading and optimized system.