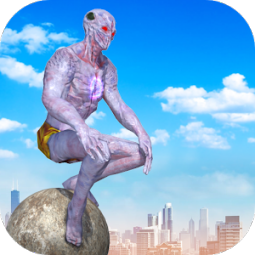 Ungodly Superhero - Like other superhero games, you will get a chance to become a real superhero and rescue New York city! Play this ultimate top down shooter game for mobile as a superhero right from a silver age of comic books is an open world games with a lot of auto theft & shooting. It's got elements of action, fighting, driving and entertainment all in a single game; It’s quite literally a whole world in itself! This game is a city simulator in third person view, where you can drive a truck, car, motorbike, & airplane etc. You play as an alien cyborg who has come to Earth with his superhero abilities to save Earth and yet the whole city fears you. You need to fight and protect the city from various star mafia gangsters from America, China, Russia, Mexico, Japan etc. This action games let’s perform street stunts, like flying, rope pull, jump from building to building and take down gangstars from the streets of criminality in new york.
STORY:
Patrol the most hotspots of criminality in Miami disctrict. The game has a fully intractable and open world environment where you need to complete missions and release the city from the mafia sinners on the streets of chinatown district and other gang lands like vegas, etc. Are your ready for great criminal theft adventure? Be ready to rob, kill, shoot and fight! Fight against anti criminality, get all the supercars and bikes. The Character is stealing cars, evading cops, racing through streets, and shooting down other gangs.

SKILLS:
Climb the wall and jump on the rooftop of the building secretly to fight with your enemy mafia criminal gangs. Explore the big city, steal and drive supercars, shoot from guns and more in this free open world game! You’re the only hope that can fight against criminal mafia in this crime city super action game. Take a super rope and fight with grand war criminals that come to kill you. You are the real superhero in this Miami crime city action game, as a super rope hero your duty is to create threat in every gangster and the lord of mafia in crime simulator Miami action game as an super stunning Miami street fighter rope hero.

SUPER POWERS:
You have special real powers. Shoot dangerous laser beam from your eyes. Shoot a rope to a building and climb over the building to the top. Your legs are very powerful so don’t underestimate them. Kick out the gangster by heavy punch and super kick. You must conquer the crime world utilizing your futuristic super powers and hold the title of new boss of this Crime Simulator Miami Rope