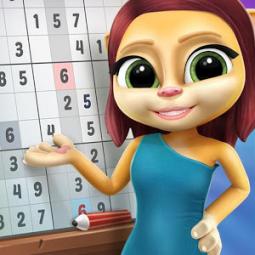 Have fun solving sudoku puzzles on different sudoku levels of difficulty. Sudoku Cats - Free Sudoku Puzzles is a game that will keep your mind active and strengthen your logic with cool sudoku variation. Sudoku for beginners and irregular sudoku for advanced players!

Daily sudoku is the best way to start your day! Solving sudoku puzzles will help you become a real sudoku master who quickly deals with even the most difficult sudoku puzzles in a short time.

Enjoy a clear, easy to read, and customizable classic sudoku board. Solving sudoku puzzles will challenge your brain anywhere, anytime with different sudoku levels of difficulty!

Download Sudoku Cats - Free Sudoku Puzzles with cool sudoku variation and play on mobile or tablet. Sharpen your mind with the Japanese game! Be the #1 sudoku player!

- Endless number of different sudoku levels of difficulty! Yes, and you can always choose to play easy, medium or hard sudoku
- Regular sudoku: 4x4, 9x9
- Overlapping sudoku: 9x9
- Irregular sudoku (Squiggly): 6x6, 9x9
- Play Sudoku X: 9x9
- Color themes - choose one of three beautiful backgrounds
- Play daily sudoku the best you can and get high on the leaderboard!
- Time limit - choose to play cool sudoku variation with time limit and your reward is doubled
- Sudoku Cruise events - participate in these events each week and dominate leaderboards!
- Special event - solve 3 sudoku games in a row and get awesome rewards!
- Connect with a Facebook account and see where your friends are on the leaderboard

Level up to play with Boosters! Sudoku Cats - Free Sudoku Puzzles will make you a sudoku master!

Hint - when you are stuck, use Hint to fill a cell with a correct number. Just select an empty field and click on a hint to get a sudoku solution for that field only!

Magic hand - solves one random empty cell in every block.

Notes - Put a note in an empty place to write possible solutions for the field. Each time you activate it, notes are automatically updated!

Auto remove notes - Once a number is used in a cell, that number is removed from all notes in a row, column and block.

Number-First input method - Tap and hold the number to lock it and use it for multiple cells.

Count and hide used numbers - Mark how many times a number is yet to be used in the puzzle game and then hide it once it’s used completely.

Auto-Save - Never lose your progress! With auto-saave you can stop and continue Solving sudoku puzzles anytime.

Unlimited Undo - Made a mistake? Just quickly go back!

Sudoku, a Japanese game, is a simple habit to have and good to train your brain. Sudoku Cats - Free Sudoku Puzzles will be the most beautiful, learnable, and user-friendly Japanese game you’ve ever played.