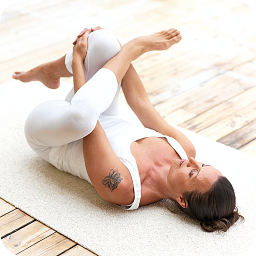 
Imagine that your body is agile and healthy, your mind is calm and balanced, and that you feel energetic and happy. Only a few Yin yoga sequences can have that impact on your life.

Yin yoga is a tranquil and restful yoga. It has been described as unbearably nice or nicely unbearable, but above all it is easy—it suits all body types and personalities. Everyone can do Yin yoga, at any time, in any place. You do not need special equipment, and do not even have to change clothes.

My wish with this app is to get you in better shape. In it, I have collected 30 of my most popular Yin yoga classes. You’ll find short sequences that you can perform any time of day, to longer classes that will revitalise your whole system. I have also included a longer guided Still Rest and a Mindfulness Meditation.

I will guide you into and through the positions as if you were practicing in one of my classes. The positions are also described in words and the beautiful photos from my book Serenity Yin yoga. I will time you to three and five minutes and support you as you stay in the positions.

The best yoga is that which is done, and with this app, it has never been easier to start and sustain a revitalising Yin yoga practice at home.

My hope, and expectation, is that Yin yoga will renew your energy and vitality, and make you flexible and calm. Lie down in the simple positions, relax, and just be.


• The app contains all 30 Yin yoga positions, read by the author and described in beautiful photos and clear text.

• The app contains 30 Yin yoga sequences, tailored to specific situations and problems, as well as all-round sequences. In total, many hours of Yin yoga for less than the price of one yoga class!

• The app has a feature to compose your own sequence with your favourite Yin yoga positions, and share it with friends.

• The app is fully downloaded to your device and no internet connection is necessary to use it after installation.

• The app is optimised for all devices (all phones and tablets), and can be installed on all of your Android devices with one purchase.

Magdalena Mecweld is an experienced and much-loved yoga instructor. Her best-selling book and app were first published in 2013 in Sweden to great acclaim, garnering a devoted following. The English translation of the book and app are Magdalena’s first publications in English.

Please note: this app is in English only. The app is not multilingual. The Swedish app is named "Vila dig i form". Coming translations of the app will likewise be named in their respective languages.