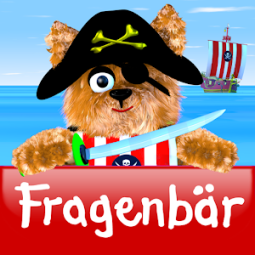 Pirates love to play! However, is there any chance to win against Captain Dog? But one day the captain is incredibly bored – so he invites the small players to come aboard. Here they may choose a game character and during the game they will be assisted by Blinky, Bonny, Benny or Buffy.

Captain Dog opens his treasure chests and sells the most beautiful pieces. The players need gold coins which can be won in different games. First, the players may choose a game, then it‘s Captain Dog’s turn. This guarantees that not only the favorite games are selected. Depending on the level of difficulty, players can win 1, 2 or 3 coins for any task which is solved correctly. The more difficult the task the higher the profit. But watch out! Whoever makes a mistake unfortunately has to watch Captain Dog grab the gold coins! The players get an immediate feedback on whether the task was solved correctly or incorrectly and the gold coins will be distributed accordingly.

After winning one treasure chest, another one with even more valuable pieces will open. Number One in the highscore is the player who has lost the fewest gold coins. Aim of the game is to leave not a single gold coin to Captain Dog and take the last treasure chest away from him.

This educational game offers diversified attention games in a fanciful ambience with an intuitive user guidance. In a calm working atmosphere nothing distracts from the actual tasks. Children can take their time in every game. They decide to start the task with the o.k.button when they feel to be ready.

Gold coins are given only if a task has been solved without any failure. The children will learn to avoid mistakes by really paying close attention.

If you have any queries oder suggestions for improvement, please do not hesitate to contact us: android@spielend-lernen-verlag.de. Thank you!