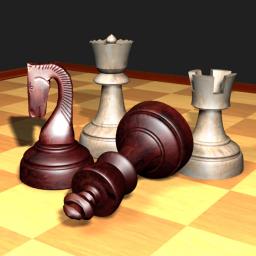 Welcome to the 2022 version of Chess. Relieve boredom, have fun and exercise your mind all at the same time with this classic board game.

Regardless of your playing level, ZingMagic's multi award winning Chess is a fun, stimulating and challenging game for beginners and champions alike.

Chess is a two player game with a colourful history which can be traced back to its Indian ancestor, Chaturanga. In 1291 the Archbishop of Canterbury in England threatened clergy who continued playing Chess with a diet of bread and water.
The game has flourished over the years and is now one of the most popular board games in the world, requiring thought, skill and strategy to become successful.

The object of Chess is to capture the opponent's King. To capture the King you must place it in check. If the King cannot escape by itself, or with the help of its army, it is in checkmate and the King is captured.

Never played Chess before, not a problem. The game helps you at every step with hints, legal move display, piece move information, game information and over 20 levels of play enabling you to learn Chess at your own pace.

Game features:
* Play against the computer or another human player on the same device.
* Over 20 levels of play to suit your mood.
* Award winning artificial intelligence engine which is particularly strong at expert levels.
* Understands all Chess rules such as en passant captures, castling, under promotion, draw by repetition, perpetual check and 50 move rule.
* Support for alternate boards and pieces, including super touch friendly boards.
* Full undo and redo of moves.
* Show last move.
* Show legal moves.
* Show threatened pieces.
* Hints.
* Chess is just one of our large collection of best of breed classic board, card and puzzle games available for a wide range of platforms.

Please note this game is ad-funded. We generate income to pay for the support and development of the game from advertising. You can choose to remove all adverts using the single IAP to purchase the game.