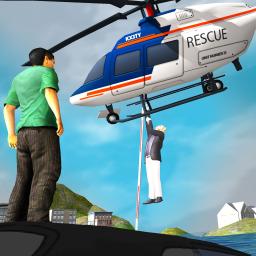 911 Rescue Helicopter Pilot presents for the first time an advance flight simulator rescue game. A small shipping boat had some problems with their navigation. A rescue team just knows their approximate location. The helicopter pilot finds their location and rescues them before the boat sinks. Helicopter rescue flight Sim is a 3D real chopper flight simulator.

At times of real need, take the rescue ambulance helicopter! No more busy traffic when you fly over the realistic city hill climb. The rescue team also transports the injured people to the hospital. Become a helicopter pilot and fly with the wounded to save them. Show off your helicopter flying skills in this rescue helicopter flying simulator game!