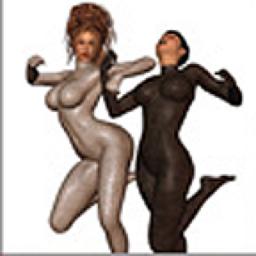 Beginning a series of the fiercest fighting females on the iPhone, Battle Babes showcases the most ambitious fighting girls ever imagined.

Featuring the first 2 fighters of this original 6 girl battle set!

Introducing:
Frioella™ - The orphaned Ice Princess and sole rightful heir to the faded glory of the ice planet of Friostias.

Aqualuna™ - mistress of the tides and sole wielder of the living forces of the aquatic. She really hates people who freeze the water.

6 pulse pounding tracks of Battle Babes backbeat!
6 distinct battle environments from the home worlds of all 6 Battle Babes!
6 gorgeous battle animations per Babe, with more attacks to follow!
Get to know our first two Battle Babes today and be on the lookout for their gorgeous frienemies coming soon.