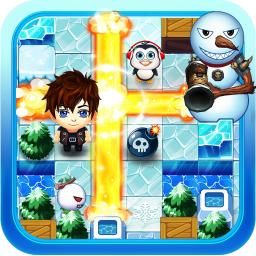 Bomber Legend Super Classic Boom Battle is an extremely exciting classic action strategy game for you created by Alphaway Studio. Develop from the classic bomber game with innovation, this game promise to bring you alot of fun and interesting.

HOW TO PLAY
+ Use joytick control to move the hero
+ Place the bomb to defeat the monsters
+ Choose good strategy to bombing smart monsters
+ Be careful, bombs can also destroy yourself in exploding range.
+ Get items hiden in obstacles
+ Collect gold and items to improve your power
+ Clear the map before time elapse
+ Defeat the big bosses in final battles

INTERESTING BOMBER ZONES
+ Ninja zone: with the support of pet like turtle, your hero warrior with fight with ninja in manga design to win the battle. Be careful with samurai in the last scene because he is extremely dangerous. Even the ninja may have special kungfu, but your bomb can take them all.
+ Pirate zone: finding the treasure hiden under the old ship, facing with monster and pirate in the difficult battle. The best tip is using horse in this zone and put your bomb bubble in the right place.
+ Zombie zone: there are different kinds of zombie need to kill to clear the map. In the apocalypse city, your hero need to defend the attack of zombie waves. Commander zombie can shoot, soldier ghost zombie can attack and nurse zombie can create poison under the shadow. So put your bomb in a smart way to survive.
+ Ice Age zone: a cute zone with 3 cute monsters: penguins, snowman and reindeer. Enjoy your adventure to cartoon world in snow village.
+ UFO zone: This zone bring you an adventure to ufo world: meeting the alien, facing with flying robot and scary z stickman fighters. And last but not least is to defeat the robot boss and bombsquad.

CUTE PETS
A big set of animals can be your pets: turtle, horse, ostrick, tiger, elephant and dragon. Pets help you to run faster, become stronger. Let's pick up some of them to become your bomber friends.

SUPER HEROES
We have both boy and girl in superheroes fighters collection: Rocky, Laydy Moon, Red Fairy, Tsumugai, Super Herou, Spaidey, Batmoon, Robinhuc, Mancap, Sonkunkai. They are not heroes in marvel novel but all of them are very cute, very skillful who can bring you to the superman adventure.

Bomber legend classic is an offline game, online mode is coming soon. It's designed to be an action fun game for free with hd graphics and vivid sound effects. With our effort to design an innovation classic bomber legend game, we expect the player can feel that: the game is fun and cute which is suitable to play anytime and anywhere wherever drive a bike, on the train, the bus, the plan, in a temple, eating candy or being in the office.

Game is for everybody. All ages under or over 18, kids and children, women and man, adults, workers, gold digger can play. Not play more than 3 hours per day, spend time of relaxing, working, exercising, watch football if you want to. We will give you frequent update in 2017, 2018 and so on.

Get ready to blast the enemy. Bomb it! Play it to fulfill your mania. Blow up everything in the way you run. Gods knows who is the winner in final fight. You will be a big bomberman with a ton of bomb and powerful blast in a bomba game.

Bomber Legend was featured in iOS Store on 2 placements in 대한민국 on 2017년10월18일.