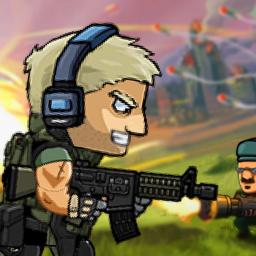 Metal Soldier Classic is a game about a run and gun (2D) shooter action game. During side view stages, the player can shoot leftward or rightward while standing, as well as horizontally while walking.

There are different levels, and you'll unlock more when you finish a level. Whoever you're playing as though, the idea is the same - shoot everything and don't get shot.

FEATURES.
- This is a classic game action shooter with classical Run 'n' gun gameplay.
- Use the pad to move around and tap to jump and shoot.
- Great music that elevates the action and much more.

What you’ll get.
- The exciting maps.
- Lots of enemies to fight.
- Classical Run ’n’ gun gameplay.

The last thing, this game is easy to play, but hard to survive. So…. Are you ready?!