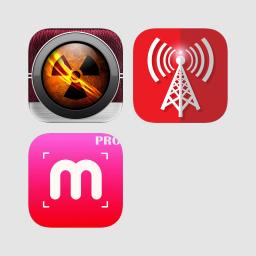 EMF RADIATION
Stay in a healthy environment. Discover nearby radiations behind walls, leaks and microwaves. Check if your bedroom is a suitable place to rest.
Track magnetic fields near you. A warning beep will be activated to warn you and prevent health problems.
The app detects ferromagnetic metals using the iPhone's built-in compass feature. Also works as Electrosmog (EMP) detector.
Detect many kinds of home appliances that create radio-frequency EMF. For example:plugs,cell phones,routers, baby monitors, doorbells, intercom systems,night alarm clocks, electronic appliances , electrical wire, antennas. They emit radiation that damage our organism.

EMF Cell Towers Detector
Discover the sum of radiation from antennas and communications base towers nearby, in just a few seconds, and visualize where they are.
Discover the radiation that you’re receiving currently by the communications towers that surrounds you.
Point with your mobile upright and you will see the EMF towers emitting and the current distance to them, as it is used augmented reality.
The towers you can see are UMTS, CDMA, GSM and LTE, which also establish 3g and 4g communications.
We are in an invisible world plenty of waves which surrounds us and your body gets impregnated. Discover which are the towers that exist nearby, at home, at office, or wherever you want to check. You will be surprised of the large number of repeaters, antennas and transmitters existing nearby.
This app uses your GPS to get your location and shows you the towers that emit near you in a radius of several hundred meters. If too many towers show up, which is usual in cities, use the horizontal slider to shorten the radius that is reached.