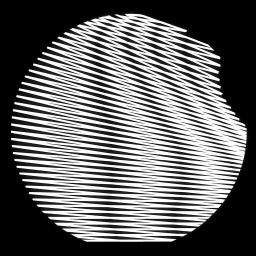 Drawing with this iOS exclusive app is a completely new artistic experience. You will not be able to precisely control the trace of the drawing as you traditionally do. Instead, the evolution of the drawing will be partially decided by an intelligent algorithmic agent. You start the drawing by adding circles to the screens; the agent will draw a line that connects these circles and will draw a number of variations of the line following some stochastic behaviours modelled on the Perlin noise. The results are mesmerising drawings in which patterns and lines entangle creating variations of the Moirè effect.

Despite aspects of the creation are delegated to the artificial intelligence, you will be able to personalise the drawing by moving the circles throughout the screen and by removing them from the canvas. Also, you can make the lines more or less curved and you can play with their width, their distance, and fine-tune the randomness of the variations. Once satisfied with your drawing, you can export the image as a JPG or as a vector, and finalise it with Adobe Illustrator, Photoshop, or with 3D modelling software.

As a result, Interfere allows every visual artist, designer, tattooist, and illustrator to intuitively create original interference patterns and geometries that are not easily achievable by any other means and that will surprise you at all time.

Interfere can be also used as an educational tool by researchers and practitioners in art and science that are interested in exploring the Moirè effect. Although it is commonly considered an unwanted side-effect in printing processes, this effect has since long inspired generations of artists and mathematicians for the optical illusions that the phasing and superposition of the frequencies cause.

Interfere is built with C4, an open-source API for rapid-prototyping with animation, interaction and media on iOS. C4 is written entirely in Swift - c4ios.com