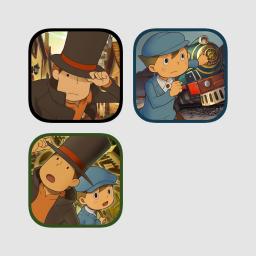 The Professor Layton Trilogy Bundle is a discounted set of apps that includes the HD iOS versions of Curious Village, Diabolical Box, and Unwound Future.

If you already own one or more of these games, you can purchase the remainder of the bundle's games at a reduced price.

— The Professor Layton Series —
The first three games in LEVEL-5's popular puzzle adventure series, that sold over 17 million units worldwide, are now available in HD for mobile devices! Tackle hundreds of tricky puzzles to progress through each story, exploring a series beloved by all ages."