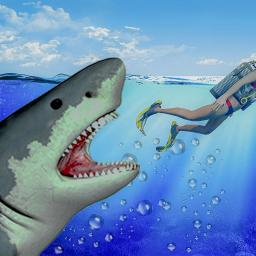 Play a role as a hungry sharks and make some ocean feasting to survive in the pacific islands. Let’s hunt multiple ocean nomad delicious and dangerous creatures on sizzling blue ocean attack environment. Open jaws and find your prey in the whales submarines or the unwitting humans to eat them and fulfill your hungry sharks thirst. Amazing shark attack games atmosphere with multiple thrilling and exciting blue shark tasks for accomplish. Go and hunt multiple fishes or make some fight with blue whales or make your prey that are sit in the raft of the ocean or eat the unwitting peoples.