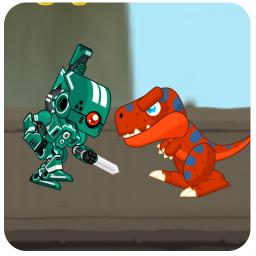 This is shooting game you have to controls Robot to kill dinosaurs that come to destroy the world.
In game have many dinosaurs , they can fly , run , and fight so you cannot close to them.
Robot have power gun to kill Dinosaurs and can collect special gun that have more power to kill dinosaurs in one shot.
Collect more money to buy special gun from Local store. In this game we have different levels so when you pass each level will have UFO machine to move you to another place.