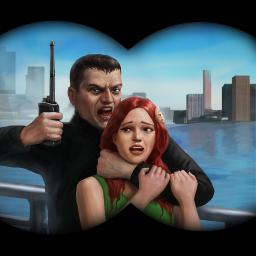 Load, aim and fire! Become the deadliest Sniper in Sniper Ops 3D! Upgrade your weapons and hunt down the enemies in over 200 levels!

Sniper Ops 3D is the best of the sniper games available! It’s fun and free app that puts you in charge of fighting terror. Become one of the most deadly army assassins and take out all of your enemies. Sniper Ops Modern Kill lets you wage online war against terrorists and deadly bad guys!

Sniper Ops is the best 3D Sniper Shooting Game on your phone because it charges you with the mighty responsibility of fighting a global war on crime. Become the ultimate shooter and protect all of humanity. Not your ordinary gun game, the Sniper Ops Shooting Game is a war and FPS game that’s addictive and ultra-realistic.

● Realistic 3D graphics with outstanding animations
● Take your pick of weapons including sniper guns and rifles
● Hunting and killing missions to wage war on terrorists
● One of the best free assassin games online ever
● Help police and the army clear all terrorists from a territory
● Earn rewards with this app by completing missions
● Amazing gun battles to destroy real enemies
● Unlock tons of new sniper rifles like the legendary dragunov!
● No internet connection required!

Typical hunting and killing games are boring. Don’t shoot deer, elephants, lions, or any animals in your online games. Go for the real enemies who are creating terror all over the globe. Download The Best 3D Sniper Shooting Game and join millions of online players who are using their sniper skills to make the world a better place.

The Best 3D Sniper Shooting Game offers ongoing new content all the time and it gives you the chance to be the hero in many virtual cities. This modern combat game allows you to race against time to prevent WWIII and go up against rivals that you may have never thought you’d face in real life.

Our Best 3D Sniper Shooting game has a loyal following of players who say it’s the top sniper game for iPhone. Read the reviews and get shooting yourself.

The Best 3D Sniper Shooting Game is an absolutely free assassin shooting game that has quickly become one of the top games for iOS. Download it for your iPhone today!

Please note:
● New content (more modern weapons, regions) in the works!
● Tell us what features or weapons you want to see in the game! We are always looking for honest feedback! Would you rather customize your assassin or kill other contract killers (aka multiplayer)?
● If you like shooting games, please rate us and support further development!
● If you like this game even more, please purchase something!

Disclaimer
Sniper Ops 3D contains mature content and it is not recommended for young children.

The game is great but, I’m not sure if the energy refills on its own or that you need to buy refills if so please developers fix this, this is a heck of a game to be too greedy on people like us!😎

It’s not bad, but the shooting buttons on the wrong side. Makes it so much harder to play. And to keep playing you have to buy coins.

It’s not bad, but the shooting buttons on the wrong side. Makes it so much harder to play.