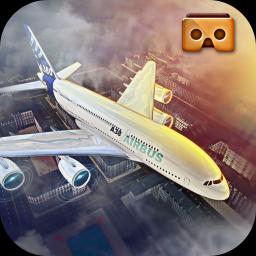 Have you ever thought of flying an airplane in reality? Now is the chance to fulfil your dreams with Virtual reality airplane flight. VR Airplane Flight Simulator is going to be an adventurist flight for you. This Virtual Reality game has a fantastic VR environment, with clouds, high flights and air traffic. This VR Airplane game offers the most immersive virtual reality experience to you.

In this VR game you will experience and feel like a real airplane take off. Select your favorite airplane and fly high into the skies. Take a thrilling sky ride through the mountains, into the trees, clouds, roads in the fabulous dream of modern Virtual World. With Airplane Simulator, you will find realistic environment and a real aircraft flight experience. You will get the realistic flight simulator experience with real plane flying over the city. Ride your aircraft as it is ready to board. Be an airplane pilot to control your flight over the city and islands. Flying a VR Airplane is totally a different task to master the safe flight.

Get ready for the experiment of flying a plane like in real life with this VR 3D flight simulator. Enjoy the virtual world like a real world. In this virtual reality airplane game you can test your airplane pilot skills in extreme weather conditions to reach your destination. You will learn to fly an air plane in reality. Select an airplane parked in airport hangar near helicopter helipad. Let’s run the airbus on runway stripe and pull the control gear to fly your major private jet. Fly your Boeing aircraft on the way point on navigation route by the arrows. You have to fly carefully to be a plane hero landing expert.