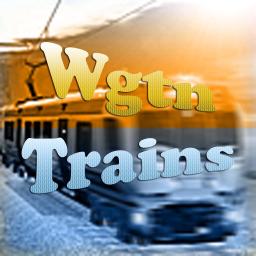 WGTN Trains shows the passenger train timetable data for Welllington, New Zealand. The application has a simple and easy-to-use interface that display train times at the touch of a button.

You can display train times for the current day, the following day and the weekend. WGTN Trains has an option to see the "Next three available Trains inc Train Fare" , in which not only does it display the next three available trains but also includes the single adult and child train fares, this option is useful for people who are on the go, once you have opened an train line, you can quickly switch between train lines by swiping left or right on the touch screen.

You can also select a specific date, to view train times for that day.

For even quicker access to train times, you can open up the favourites menu, and select your train line with your favourite saved option.

The train timetable data is bundled within the application. Internet access is not required and no annoying advertisements will be displayed.

The train timetable information has been obtained from the official train timetables published by Metlink, New Zealand. This app is the sole work of the developer, and is not affiliated with Metlink.