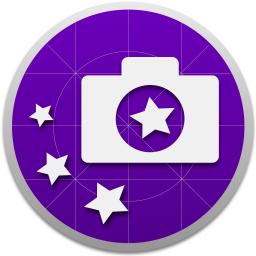 AstroDSLR is an application similar to AstroImager, an easy to use tool for astrophotography, but intended for use with DSLR cameras.

AstroDSLR controls ISO, aperture (if lens mounted), shutter speed, exposure compensation, metering and focusing modes, white balance, image quality and format and BULB exposure length. It can preview (optionally using LiveView) or capture and save images to selected folder with any file name prefix, count and time lapse, browse captured images and show them in Finder, zoom and stretch them automatically or manually. It can measure FWHM and the drift of a selected star to help easier and faster focus and align your equatorial telescope mount. Captured images can be plate-solved using public astrometry.net service or local Astrometry for OS X application.

Even if it can be used separately, it is meant to be used together with AstroTelescope and AstroGuider. Application communicates over INDIGO protocol and it can be used to integrate with any INDIGO or INDI 3rd party application as well.

The built-in INDIGO driver is based on ImageCapture API and, in theory, it can work with almost any Nikon DSLR, Canon EOS DSLR (but not EOS M or DIGIC II and older cameras), Sony Alpha DSLR-like or mirrorless camera. Not every feature is supported for every camera (e.g. no LiveView or manual lens drive with older Nikon and all Sony cameras), but it doesn't mean, that such camera can't be used. As far as this application is based on INDIGO framework, it can use many INDIGO or INDI drivers for focusers for astronomical telescopes which can be easily adapted to control manual focus lenses or macro rails.