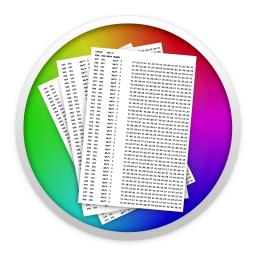 Create Edit Decision Lists - EDLs - from Final Cut Pro X XML files. The EDLs can conform to the CMX 3600 standard and can be used to bring your cut into post production systems like DaVinci Resolve, Smoke, as well as various non-linear editing systems.

EDL X features flexible Source Reel Name handling:
• Source names can be read from XML files, or directly from the QuickTime files used in the project.
• Alternatively, media file names, or full file paths can be used.
• Source names can be made to conform to strict CMX standards (three numbers), or 8, 16, 32 or unlimited alpha-numerical characters.
• All source names are user-editable, on a per-source basis.

Roles can be used to filter the clips reflected in the EDL.

Metadata associated with the footage - or added in FCP X - can be shown in the EDL as comments. This is provides a way to pass ASC CDL values on to color grading.

EDL-X can be set up so that EDLs can be made directly from Final Cut Pro's Share menu.

The app can list effects including some parameters and keyframes.

EDL-X groups all video and audio clips into as few tracks as possible. Each video track gets its own EDL, with synch audio in the same EDL.

Drag and drop XML files to create EDLs, or drag projects directly out of FCP 10.3.