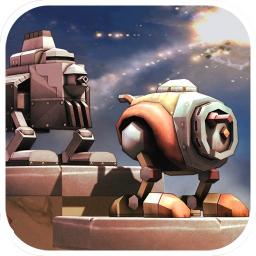 ★ "It's a strategy board game that feels right, and it outdoes much of its competition on the platform." (Touch Arcade)

★ "Greed Corp is easy to learn and difficult to master, a real pearl in the strategy genre." (spieletipps.de)

★ "When a game looks this beautiful, there is an impulse to just purchase it immediately, but when there is solid gameplay to back it up, the purchase is all the more appealing." (148Apps)

★ "Featuring last man standing mechanics, Greed Corp brings out the inner Machiavelli in all of us." (AppSmile)

★ "It is a highly recommendable game that allows for some cool
strategies." (TouchGen)

★ "While the single player is engrossing, and online multiplayer fun, it shines with four friends playing and rejoicing as foes plummet to their doom." (The Guardian)

Greed Corp, the turn-based strategy, at its finest!

The award winning console and PC strategy hit is now available to your MAC!

Greed Corp is a fresh and fun strategy game situated in a rich Steam-Punk world, offering a long-lasting single player campaign and a variety of CROSS PLATFORM MULTIPLAYER options for up to four players.

Find the delicate balance between harvesting the land for resources to fund your war machines and preserving it to stay alive. Choose one of four different factions: the industrious Cartel, the militaristic Empire, the Freemen preservationists, and the Pirate traders. Destroy your enemies, or destroy the very land they stand on, before they do it to you.

• Earn Trophies and titles, and climb the online leader-boards playing as one of four factions in bite-sized matches of around 20 minutes.

• Campaign mode with 4 chapters spread over 24 unique maps including an extensive tutorial.

• Customize multiplayer matches with any combination of local, online, and computer players (with three difficulty levels).