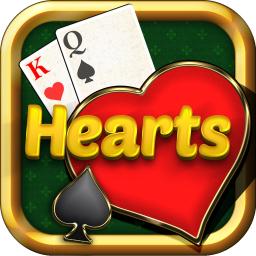 Hearts, one of the most popular, enduring card games in the world, It is a great fun for players of all ages.

Fall in love with Hearts. Hearts is structured to be played with four players, it is not difficult to learn but there is strategic play abound. Like other fun trick-taking card games, the rules of the game are not complicated.

Hearts is an "evasion-type" trick-taking playing card game for four players, although variations can accommodate 3–6 players. The classic card game where you can Shoot the Moon, but look out for the Queen of Spades!

Hearts is also known as Black Lady, The Dirty, Dark Lady, Slippery Anne, Chase the Lady, Crubs, Black Queen and Black Maria, though any of these may refer to the similar but differently-scored game Black Lady. The game is a member of the Whist family of trick-taking games (which also includes Bridge and
Spades), but the game is unique among Whist variants in that it is an evasion-type game; players avoid winning certain penalty cards in tricks, usually by avoiding winning tricks altogether.

The overall objective is to be the player with the fewest points by the end of the game.

The Hearts Card Game has quite a few rules, but it is quite a well liked card game if you take the time to learn them.

If you take a break from other card games, then hearts is very interesting alternative.

Hearts is played in a clockwise order. Subsequent players are to play a card that is the same suit as the lead card.
This is known as following suit. If they do not have a card that is the same suit as the lead card then Heart players can play any card that they have. Among the cards they may choose to discard or “slough” is a penalty Heart or the Queen of Spades. The points accumulated by any penalties and the trick are given to the player of the highest card in the suit that was originally put into play. An ideal hand would have 0 points. The player who takes the trick will become the leader of the next trick. A leading trick player is not able to start with a heart unless they only have hearts in their hand or until the hearts have been “broken”. This means a player must play a heart while another suit is being played. Each round of Hearts will end when players have completed their hands. When a player reaches 100 points, the game will end. Whichever player has the LEAST amount of points wins!

Guarded high-cards should be saved until later in the game, especially if they are hearts. This will help to prevent someone from successfully Shooting the Moon. If the player who receives your discards likes to Shoot the Moon, you may wish to pass them a low heart. This may discourage them from making the attempt in the first place.

Come enjoy Hearts the way it's meant to be played!

Will you play it safe or go for the big score?

Try out this smashing Hearts game and see if you can win big.

Have you always wanted to try Hearts but never had the chance? Your wait is over. Download it Now!

If you’re enjoying the game Hearts, please take
a few seconds to give us a review!

Your feedback is Welcome, please post your Hearts queries.