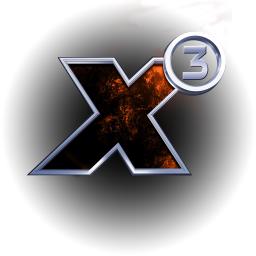 The Sequel to the award winning X²: The Threat will introduce a new 3D engine as well as a new story, new ships and a new gameplay to greatly increase the variety in the X-universe. The economy of X³: Reunion will be more complex than anything seen in the X-universe before. Factories are being built by NPCs, wars can affect the global economy, NPCs can trade freely and pirates will behave far more realistically.

Space just got a whole lot bigger with the addition of two new sectors and the introduction of the gargantuan Player HQ which allows many exciting new features including the ability to build your own ships and even give them customized space paint finishes. In addition to the new M7 battleship, there is an assortment of new weapons and onboard ship devices to use and explore.

Extensive development has gone into the X³ engine, to create dramatic visual effects and stunningly realistic starships. Coupled with the massively enhanced A.L. (Artificial Life) system, X³: Reunion will present players with an ever changing, evolving universe; where a players actions really can shape the future of the universe.

Newcomers will enjoy the additions to the already graphically impressive, almost living X³-Universe, while veterans can expect new construction options and an improved physics model.

What happened so far: While the Argon fleet is stretched almost to breaking point by the continuing attacks from Khaak, a new enemy is stalking the X-universe. What links a mysterious ship with the power to disappear, the ruthless Yaki pirates and a machine left by an ancient species? Its time to strap yourself in, warm up your laser cannon and get some answers.

Features:
- Exotic space ships, revised battle tactics and exciting missions for all difficulty levels
- Expand buildings by linking factories into huge production compounds
- The most gigantic, complex universe ever seen in a game continues to expand
- Hundreds of goods to trade in a gigantic universe with real economic simulation
- Pilot hundreds of ships in dogfights - command a fleet of many ships into battle with strategic controls
- Major wars and tactics such as sabotage are incorporated into the exciting new story line
- A simplified learning curve allows you to get straight into the action. New improved menus, configurable controls allow for customized play