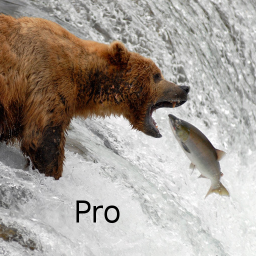 This app allows you to preview your cropped selection before setting your devices wallpaper. The demo version allows one wallpaper set per month; the pro version sets are unlimited.

Katmai National Monument was created in 1918 to preserve the famed Valley of Ten Thousand Smokes, a spectacular forty square mile, 100 to 700 foot deep ash flow deposited by Novarupta Volcano. A National Park & Preserve since 1980, today Katmai is still famous for volcanoes, but also for brown bears, pristine waterways with abundant fish, remote wilderness, and a rugged coastline.
Situated at the mouth of the Brooks River, along the shore of Naknek Lake (the largest lake within any unit of the National Park System), Brooks Camp attracts visitors of all kinds to view brown bears, enjoy world-class sportfishing, and learn about the long human history of the area. Also a starting point for many backcountry adventures, daily naturalist-led/concessioner-operated bus tours from Brooks Camp provide easy access to the geologic splendors of the Valley of Ten Thousand Smokes, site of the largest volcanic eruption of the 20th century.
Brooks Camp offers many public services and accessibility options unavailable elsewhere in Katmai's millions of acres of wilderness, visitors must arrive prepared to experience backcountry Alaska. Whether staying for just a few hours or for several days, visitors should expect to encounter wind, rain, cold, mud, uneven terrain, and transportation delays. Be sure to dress and pack in anticipation of diverse and changing weather conditions.
Most Brooks Camp visitors arrive via small, float-equipped aircraft. Click here for directions and other transportation information.
While bear-viewing platforms and most trails around Brooks Camp are wheelchair accessible, they are unpaved and frequently muddy. Visitors should be prepared to leave the trail in order to avoid a bear.
Bear Jam!
Bear activity at the Lower River may delay crossing Brooks River Bridge (see map below). Please be prepared to wait in windy and/or rainy conditions and allow yourself ample time to meet meal services and/or your departing flight. Brooks Lodge.
Katmai National Park & Preserve (click here for map) is located on the Alaska Peninsula, across the Shelikof Strait from Kodiak Island. Park Headquarters is in King Salmon, about 290 air miles southwest of Anchorage. Several commercial airlines provide daily flights into King Salmon as it cannot be reached by road. Brooks Camp, approximately 30 air miles from King Salmon, is a common destination for visitors to the Park. Brooks Camp can only be reached via small float plane or boat.
By Air
Most destinations in Katmai National Park & Preserve may be directly accessed via air taxi flights chartered from Anchorage, King Salmon, Homer, Iliamna, Kodiak, Soldotna, or other nearby Alaska towns and villages. Regularly scheduled commercial flights to King Salmon (AKN), which serves as NPS administrative headquarters and the starting point for most Katmai adventures, are available from Ted Stevens Anchorage International Airport (ANC) via PenAir and Alaska Airlines.
Brooks Camp, located on the Brooks River approximately 30 air miles from King Salmon, is a common destination for visitors to Katmai. Brooks Camp can only be reached via small float plane (chartered from many of the towns and villages listed above) or boat. Click here for a complete list of commercial services operating in and around Katmai.
By Boat
Boats can access the Katmai coast from villages and towns along the Pacific Ocean coastline. Brooks Camp and other locations along the Naknek River drainage can be reached by power boat from the villages of Naknek and King Salmon, located just west of park boundaries on the Naknek River.