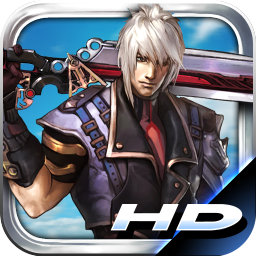 Enter a huge world made of cinematic 3D environments in this intense role-playing game, a worthy heir of its Japanese predecessors. The absorbing story implies heavy responsibilities: as Astrian, you must save Algoad from destruction and restore the living bond between humans and nature. Enjoy dozens of hours of exploration and fighting in majestic landscapes. Talk to the people you meet, featuring full voice acting: they may join your team, reveal some secret, give you a quest, and more. The thrilling turn-based fighting system will bring you to the heart of action!
- The best, deepest Japanese role-playing game available on your HD smartphone.
- Freely explore majestic regions, real-time rendered in full 3D, with free 360° camera.
- A mix of fantasy and sci-fi: fight with swords or guns, face robots and magic, fly your own ship!
- Play as Astrian and save Algoad from destruction in this intense quest, lasting dozens of hours.
- Dynamic turn-based fights: preset your attacks, which will be triggered once the gauge is filled.
- Choose the 3 fighters of your team among the 8 different characters you meet along the way.
* Because of the high quality graphics used on this game, once installed on your device, this title will use 1.09 GB of space*
Certain apps allow you to purchase virtual items within the app and may contain third party advertisements that may redirect you to a third party site.