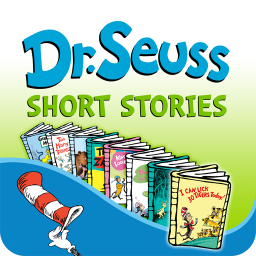 Dr. Seuss Short Story Collection contains eight classic titles all in one omBook! Each story entertains in classic Seuss style and provides timeless moral lessons for readers young and old.
Included in this fun interactive omBook are:
From Yertle the Turtle...
- The Big Brag - A rabbit and a bear both boast that they are the "best of the beasts" only to be humbled by a mere worm who sees "the two biggest fools that have ever been seen!"
- Gertrude McFuzz - A young bird named Gertrude obsessed to be prettier learns a valuable lesson about accepting and believing in oneself.
From I Can Lick 30 Tigers Today! and Other Stories...
- I Can Lick 30 Tigers Today! - A boastful young cat learns the perils of bragging when he overconfidently declares he can lick 30 tigers.
- King Looie Katz - King Looie of Katzen-stein insists that his tail be carried around which leads to his kingdom revolting with "demo-catic" results.
- The Glunk that got Thunk - A small cat tells the story of his imaginative sister who "thunked a Glunk" and how he must team up with her to get rid of the disruptive creature.
From The Sneetches...
- Too Many Daves - Mrs. McCave names all of hers sons "Dave" which causes problems in her family and leads to an amusing list of names she wishes she had named them instead.
- The Zax - A north-going zak and a south-going zak stubbornly refuse to move out of each other ways and get literally get stuck in their tracks.
- What Was I Scared Of? - A timeless message about fear and tolerance as the story’s narrator repeatedly meets up with an empty pair of pale-green pants, both who are equally afraid of each other.
Recommended Ages: 3 - 9
Features:
Three ways to read: "Read to Me," "Read it Myself," and "Auto Play"
Picture / Word association — words zoom up and are spoken when pictures are touched
Individual words highlight and are read aloud when tapped
Professional audio narration
Custom background audio for each scene
Pages pan & zoom to accentuate the beautiful, original art of Dr. Seuss
Official Dr. Seuss licensed App.
Dr. Seuss Properties ™ & © 2013 Dr. Seuss Enterprises, L.P., All rights reserved.