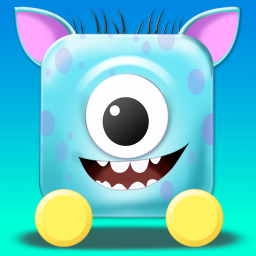 Roll, jump, fly, or sail around Mario´s Alphabet, in a delightful world filled with early reading. Kids practice letter recognition and learn to identify letter sounds through auditory processing skills in an environment that encourages play, exploration and fun. Kids will never know they are learning! For ages 3 to 7
Inspired by the works of famous intelligence expert Jean Piaget and educational innovator Maria Montessori
THE GAME
A funny and cool rolling character pops up. Kids work their way through the game, which has a do-zen or so levels for each chapter, pushing the letters along the path and getting through various obstacles. The obstacles are letters. The letters are animated and deliver phonemic sounds while being moved to the correct place. When they are in the correct place, a cool world with a funny voice will reinforce learning. The character can continue its way until he arrives at the end of the level and gets a special egg. After cracking the egg a new character appears and kids can select which with character to continue playing! Higher levels are harder; combining letters learned earlier in the game and having kids look several moves ahead. Kids have to figure out how to get stuck, and each level can be replayed until they figure out
MAIN FEATURES
- Sharpen your child's reading skills and awaken their awareness
- 168 challenging levels
- Inspired by the works of famous intelligence expert Jean Piaget and educational innovator Maria Montessori
- Children will learn to identify all of the letters, and relate them to funny words!
- Delightful animations help children learn the individual sounds of letters in a fun and engaging way
- Boost memory, problem solving, logic, auditory processing, and spatial cognition skills
- 25 super funny and cool characters to play with
- Designed with your children in mind - there are no high scores, failures, limits or stress
- It´s ADDICTIVE, children will never know they are learning!
- COPPA compliant, no ads, no in-app purchases
Set the stage for reading success with this Cool interactive game. Kids will have so much fun learning their ABCs with the 24 adorable monsters and superheroes in Mario´s Alphabet. Each level features one talking letter and one funny character. Before you know it, your child will have built a strong foundation in reading readiness and have a blast dong so!
INSPIRED BY MARIA MONTESSORI
Mario´s Alphabet is inspired by the works of the famous Italian educator Maria Montessori, who believed that children could grow an develop very well if left to play without too many restrictions but with an orderly environment that promoted their efforts at being independent and critical thinkers.
INSPIRED BY JEAN PIAGET
Mario´s Alphabet is inspired by the works of famed Swiss scientist and intelligence expert Jean Piaget (1896-1980), who believed that ´children are little scientists´, and that a child´s thoughts are built through experiences that encourage him or her to engage in the reasoning process.

INNOVATIVE, SCALEABLE PLATFORM
Mario's Alphabet innovative scalable platform for evolving experimentation lets children take ad-vantage of the time they spend on touch screens -- so they aren't just playing mindless games, but learning eve-ry second of the way.
DRAG AND SWIPE CONTROLS
Mario's Alphabet features both "Drag" and "swipe" control, which are essential for young children´s quick hands. Children are able to choose how to move the character.
MULTIPLE LANGUAGE SUPPORT
The app is now available in: English, Spanish and Portuguese
CONNECT WITH US!
If you have any support request, please write at apps@1tucan.com