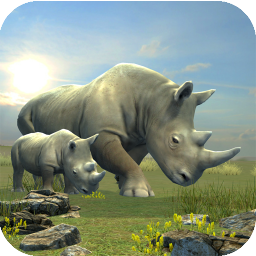 A young rhino awakens in the wilderness. Can you help him? He's your responsibility now. You have been chosen to take care of him and help him rebuild his lost family. This young rhino is last remaining member of the mythological Umkhombe Family. Posessing special magical abilities, these are not your ordinary animals. It is up to you to help him rebuild his tribe by finding new members. Since the great defeat of the Umkhombe Clan, other competing families have taken over. The goal of the game is to regain control and rule the territory again. With the right strategy and skill, victory can soon be yours!
Explore crocodile infested rivers, navigate the wild and treacherous safari landscape, fight off attacks from cheetahs, hyenas, rhinos, hippos, Lions, Leopards, snakes and other dangerous animals in this high action animal simulator.
The game is one part animal simulation, one part role playing game, and one part adventure game. It will take you on an ultimate epic journey as you establish your home, build your great warrior clan, use your magic skills, survive against enemies that attack, clash with 4 enemy clans, and ultimately defeat all 6 Super Bosses. Important Note : For best performance, try restarting your device before playing. The 3D graphics are very processor intensive and the game will work better on powerful devices.