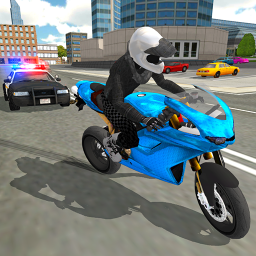 Motorbike racing games have never been this extreme! Race around unlocking new fast bikes and causing bike mayhem throughout the cities in this massive open world free bike driving simulator!
Extreme Motorbike Driving 3D is one of the best bike games for Android!
Drive at high speeds through the city on your motorcycle racing past police cars, taxi's and traffic as you unlock new fast bikes with unique designs!
Looking for a motorbike stunt game? Perform insane bike stunts as you jump over vehicles, pull wheelies, flips and wreck havoc throughout the city! ..or just smash into other cars in motorcycle crashes and watch as you body flies across the road! Show us your skills as you pull off some awesome motorbike stunts in one of the best free bike games available!
This realistic motorbike driving simulator brings you closer to the experience than ever before with super fast bikes as you burn rubber on the streets whilst doing motorbike stunts!
This game is a sandbox free bike simulator game with tons of possibilities! Bike race around the cities, perform stunts or cause chaos for the city police! This is the most extreme best motorbike game you'll ever experience!
Open world motorcycle driving has never been more extreme with tons of new long open roads to drive on with this driving sandbox game! Race through busy cities full of traffic filled with ambulances, ice cream vans, police cars, taxis, sports cars and more speeding past them at eye watering high speeds in this high performance bike simulator!