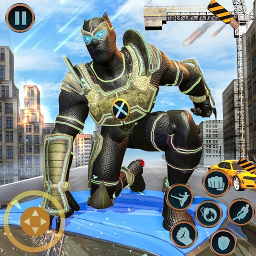 Flying Super Hero Panther Robot crime city rescue is the crime fight between the protagonists and the antagonists combined in superhero fighting game with kick and punch combos. You have to become the superhero new york needs in this time of despair. You have to keep on fighting to survive this cyclone of crime and terror. It’s time to show your love for your city in this free games for kids. You have been given training of martial arts by the African protagonist, to save the civilians from the street fighting, plane crash, suicide and robbery in this free games download. In this flying robot game you have the powers of a super hero robot to do crime patrol over the city at night as well. Super panther flying robot crime city battle is the super hero game to eliminate the outlaws and the town crime prevailing in the city. The battle city is in need of your skills and valor for it to become a survival city. People are praying for a flying panther robot who can save them from the antagonist atrocities in this superhero vs gangster city battle. You cannot play this free games without wifi.
Not unlike other panthers game but a super hero game with superkick and fly robot hero. Stop looking for superhero games and play супергерой with power hero & пантера. This is the best super action hero in super hero games. Superhero new york search ends with this super hero game. Flying robot games with mafia & criminal plus black super hero cannot be any more fun. Street crime is on the rise and a crime fighter who can combat continuously as superhero with criminal mafia is the need of the city. This is not a job for iron hero or superhero captain robot or even a kung fu fight but only for black robot panther. This is the future fight and future battle straight out of superheroes academy which has produced a concept superhero. The flying robot panther will win in black people games and put an end to war of infinity as soon as possible in this free games for kids.
Panther superhero crime city battle gives you the chance of becoming the ultimate legend hero in this free games for boys. You have to do just what is expected from a new york city superhero. Stop the grand city robbery from happening, make counter attacks on gangster strike action, make sure there is no escape and end this crime battle by constantly patrolling the crime city. There are a number of missions that you have to win to conquer this grand superhero battle. This is a game of hero survival. So what are you waiting for? Download our flying robot panther superhero games and end crime city in city rescue mission as the robot hero who is a champion of superhero fighting games 2018 in war of infinity.
Games Free Download Features
High quality graphics
Easy & smooth controls
User interactive game
Rescue missions & levels
Realistic environment