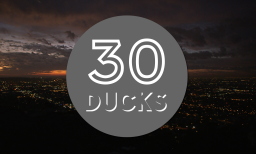 Music producers 30 Ducks introduced 3 rising UK artists to the American music industry. After just a few days the artists that were writing their tracks with the producers in London were performing them to new audiences and fans across the pond in Los Angeles.

PLAYED BEST ON APPLE TV
Our new smart album format allows the viewer to interact during the film. Viewers can watch full live performances, explore the short using a unique map view and listen to the tracks in full while looking at some behind the scenes footage.

Featuring Dan Bartlett, Rebecca Clements and Camden Cox with their tracks Feel It, Chokehold and Reasons.

30 Ducks in Los Angeles is a EC1 Studios production, experimenting in the future of Music Promotion creating a fluid experience for artists and fans in a multi platform world.