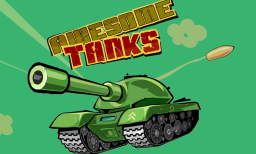 Battle City contains 35 different stages that are 13 units wide by 13 units high. Each map contains different types of terrain and obstacles. Examples include brick walls that can be destroyed by having either the player's tank or an enemy tank shoot at them, steel walls that can be destroyed by the player if they has collected three stars, bushes that hide tanks under them, ice fields that make it difficult to control the tank and patches of water which cannot be crossed by tanks. The game becomes more challenging in later levels, as enemy tanks may act as decoys to lure players away from their base so that another tank can destroy it. In addition, flashing red tanks releases a random power-up when destroyed. There are several types of power-ups, such as a clock that stops all enemies, a protective shield, and a bomb that eliminates all on-screen enemies. The enemy tanks come in four different sizes, with the largest one requiring four shots to destroy.