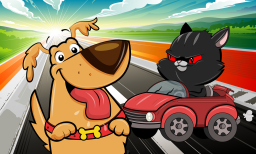 a·poc·a·lypse: an event involving destruction or damage on an awesome or CATastrophic scale.

Dog Dodge is an utterly inexplicable game that stars a dog in a world ruled by cats. These aren’t any ordinary cats, though. These are crazed cats that have learned how to drive! As such, you’re pretty much doomed from the outset, and in the confusion that follows, you’ll spend the last few minutes of your life collecting as many fire hydrants as possible.
Oh sure, you can delay the inevitable by eating dog bones or colliding with traffic lights to reduce cat traffic. Maybe, if you’re fast, you’ll catch an ambulance being driven by a fellow dog and earn an extra life. These are rare, though, and you can bet that any dog with an ambulance is going to be trying to escape from the cat apocalypse as fast as possible.
As some consolation in this world gone mad, you may earn new breeds of dogs and Game Center achievements, assuming your hydrant collecting skills are up to snuff.
Good luck, little dog. I’m rooting for you.