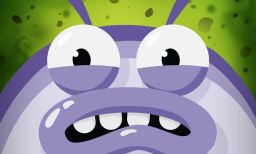 Phil The Pill is an immersive, surprising and mildly addicting action puzzle adventure game. Phil the Pill conjures the quality, fun and imagination of classic games like Bomberman, Pacman and Super Mario Bros!

Swipe, tap, punch, shoot and bomb your way through 96 levels of pure puzzle-action excellence! Players may experience fits of laughter, tears of joy, racing hearts, frustration and above all things, pure fun!

Welcome to Pillville! Ruled by the fair Princess Polycorn, Pillville is home to a peaceful colony of kind hearted, fun-loving pill bugs. One such joy filled pillbug is our hero, Phil The Pill! Phil is a pillbug who spends his days rolling ‘round the kingdom, hanging with friends and devouring delicious sugary snacks. Pillbugs love sweets!

Unfortunately, the peace, quiet and serenity of Pillville is under attack! Hank The Stank, a down right dirty rotten stink bug and his brood of Stenchmen have infiltrated Pillville and are spreading stench across the land. The poor, defenseless pillbugs have no choice but to retreat into their shells to escape Hank’s nauseating smell.

Pillville is no longer the joyful paradise it once was. It is a wasteland consumed by vile stink bug stench. Even the once bright and happy Polycorn Palace has been converted to a filthy and pungent bowling alley. Hank The Stank, a fierce, competitive bowler now spends his days on the lanes using frightened, rolled up pilbugs as bowling balls!

Having been captured and locked in an airtight bowling trophy, Princess Polycorn's magical powers have been rendered useless and there is nothing she can do to save her kingdom! All hope would be lost, if it weren’t for the severe allergies and clogged sinuses of Phil The Pill!

Pillville and it’s sugary snacks have begun to wither and rot. Phil The Pill, immune to the stench, is our only hope! Be a hero, and help Phil The Pill save Pillville!